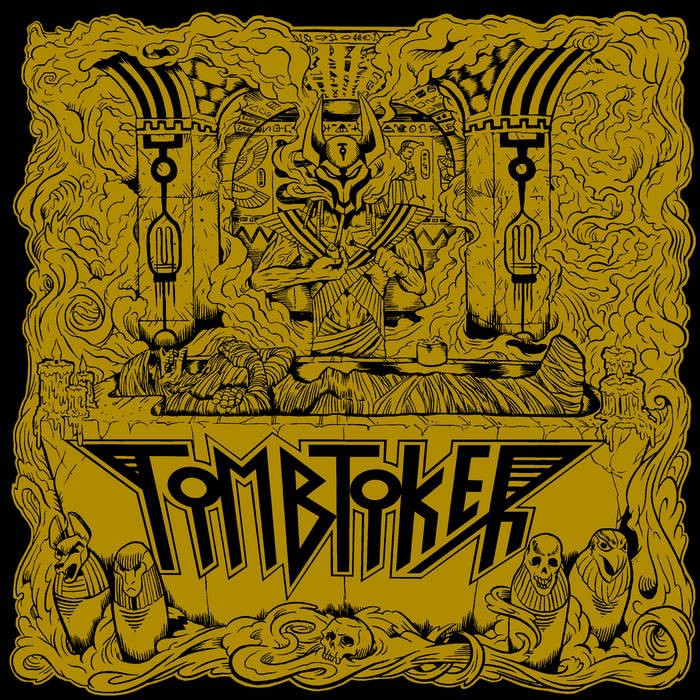 tank_06 Fire up some sour tangie and take a journey with Tombtoker. You gotta be ripped to decipher the coffin texts yo. This is a fun release... so many cool moments that will get you moving and noddin’ ur head. I’m excited for more.
-Jeff Favorite track: Stenchsquatch.

Frederick Squier Riffs, Riffs and more Riffs. Not only will you snap your neck but you will also tap your toes. Very catchy songs, oh yes did I mention the riffs? Favorite track: Warfare Revolution.

"Conjuring the swampy ire of Sourvein (“Blood Freak”), the frenzied pace of Black Tusk (“Warfare Revolution”), and the swagger of Iron Monkey (“Warfare Revolution”), along with the grave tenor of Grief (“Stenchsquatch”) and bitter angst of Eyehategod (“Globster”), Tombtoker order an arresting sound that had me immediately invested in each of these five tracks."
- Doomed & Stoned
doomedandstoned.com/post/180864401323/tombtoker

"I don’t know if the band’s moniker refers to one who actually tokes tombs or who tokes in tombs, but neither would surprise me. The Baltimorean five-piece Tombtoker unveil their 20-minute debut EP, Coffin Texts (on Seeing Red, tapes through Metal Swarm), with a melding of doom, sludge and metallic extremity that is righteous in its riffs and malevolent in its purposes. That is to say, they mean harm. “Warfare Revolution” and “Robo Cujo” demonstrate that plainly ahead of the centerpiece “Stenchsquatch” with its oh-you’re-gonna-have-to-play-that-at-all-the-shows lurching midsection of death, while the subsequent “Blood Freak” taps Eyehategoddy swing and closer/shortest track “Globster” (3:21) bludgeons its own riffs before a bit of Slayer-style ping ride late adds even more of that metal-for-metal feel. I’d call it promising, but maybe “foreboding” is a better word. Whether they’re smoking your corpse or just smoking near your corpse, Tombtoker bring a welcome sense of chaos to extreme sludge that hearkens to the genre’s original, unhinged appeal."
- The Obelisk
goo.gl/efx7c6

"We’re all going to need a lot more Tombtoker in our lives soon enough. And since we’re in that season, I wouldn’t be all that surprised if their first full-length record is on a lot of top 10 lists. They have such a unique sound that they’re hard to deny. Whether you like doom, stoner rock, desert rock, death metal, or any combinations thereof, you’ll have a lot to dig into on Coffin Texts. I suggest you get started immediately."
- Heavy Blog is Heavy
www.heavyblogisheavy.com/2018/12/06/tombtoker-coffin-texts/

"Infusing the standard stoner doom metal with a sludgy bit of punk energy and antagonism, the group merges crunchy riffs with sharp beats while keeping a swampy vibe active underneath."
- The Burning Beard
www.theburningbeard.com/2018/11/rolling-up-shrouds.html?fbclid=IwAR0FYjRg1p73yWWek4q5wuI5Zs2K_nK8i9H87i2glIWglJJS9eWUASqhPtg

"Tombtoker plays a musical style that is mostly rooted in stoner, sludge and doom metal while also mixing in some hardcore punk and noise rock influences to create a sound of their own, the production sounds very professional while the lyrics cover dark themes."
- Doomed to Darkness
hatredmeanswar2.blogspot.com/2018/11/tombtokercoffin-textsseeing-red.html

"Stoner doom, with gnarly dual vocals. The one guy is gargle-screaming, the other is deep throat belching, like some ersatz take on very early Carcass over Autopsy gone stoner rock riffs (which at times go full on Kyuss, “blood freak” being a perfect example)."
- Third Eye Cinema
thirdeyecinema.wordpress.com/2018/11/20/on-yoolis-night-yuletide-solstice-greetings/

Tombtoker was born out of the love of Black Sabbath, Hardcore Punk, Noise Rock, and Extreme Metal. Cutting their teeth in Baltimore Hardcore Thrash band Enemy Insects and noise rock band Roomrunner, Tombtoker takes a doom-ier approach then their predecessors, calling the dead to rise from their graves..er.. tombs rather.

Bred from the same abysmal and hostile environments as Nottingham's Iron Monkey and NOLA's Eyehategod, Baltimore's resident misanthropic sludge outfit Tombtoker unleashes a slab of groove-laden stoner sludge with enough core to kick your teeth through the back of your brain cavity. With hooks to dig into and doom to be buried alive with, this release proves that despite the modernization and sudden resurgence of the genre by industry big wigs, true peddlers of this art of self destructive musical harassment dredge onward and downward through the pits of life. Throw this on and drown in the muck.

Bandcamp Daily  your guide to the world of Bandcamp

Khruangbin and Greg Foat stop by with their amazing new LPs.